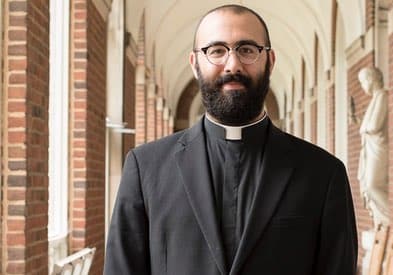 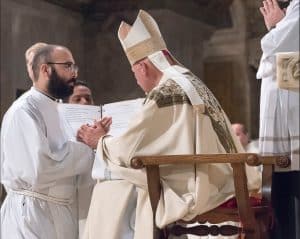 Once, when young Matthew Berrios missed joining his family for the parish Mass they usually attended on Sundays, he looked up an alternative. The Catholic Information Center in Grand Rapids, run by the Paulist Fathers, offered an evening Mass. He headed there on his own.

It was a move that would lead him to join the Paulist Fathers — he’ll be ordained as a priest on May 20, 2017.

As he approaches ordination, Deacon Matt, a graduate of Grand Valley State University, reflected on that first encounter, and how he arrived where he is today.

“I really loved the preaching,” he says of the Catholic Information Center. “I loved the music. I loved the ministry that the guys did there … And so I just kept coming back.”

At that point, being on his own at Mass prompted him to think more deeply about being a disciple of Christ. He was relatively private about his faith. He had a passing thought in high school religion class that he might be a priest, but it would have been hard for others to see that in him.

“I really didn’t go to the youth group at my parish,” Deacon Matt says. “I, for a long time, did sort of the bare minimum. Just showing up for Eucharist on Sundays, and not doing much else beyond that.”

But the thoughts about being a priest kept returning throughout college.

“And even as much as I pushed it away or ran away from it myself, it was something that always drew me back towards it,” he says. “Something almost magnetic, like falling into gravity.”

That pushback owed to his fears, he says.

“You know, can I be happy in this life? Will I be fulfilled?,” he recalls. “I eventually came to the realization that if this was something that God was actually calling me to, it wouldn’t be something that would make me a wretch or a completely miserable person. That is not the kind of God that we have.”

He researched his options quietly — so quietly that his mother was taken off-guard when he shared his intentions.

“And so she just kinda sat there for a second,” Deacon Matt. And then, he says, she added, “’Well, okay. What can we do to help you?’ So it was just a very surprising but supportive first encounter.”

Berrios says this arrangement has reinforced the missionary nature of the Paulist Fathers — the long name for the community is “The Missionary Society of St. Paul The Apostle.”

Make a gift in honor of Deacon Matt’s ordination

As the next phase of his mission approaches, Deacon Matt most looks forward to the intimate connection he will have with people at the pivotal moments of their lives.

“You know, their sorrows, and their griefs, and also in the joys that they share,” he says. “The fact that as a minister you get to be a privileged witness of all of these different acts. And so being a priest in particular, I look forward to being able to celebrate those. To recognize those joys and those griefs through the sacraments, through preaching, being able to break open the word, being able to relate the story of Jesus to people lives.”