Grandchamp: A Women’s Monastic Community Born of the Reform and with an Ecumenical Vocation 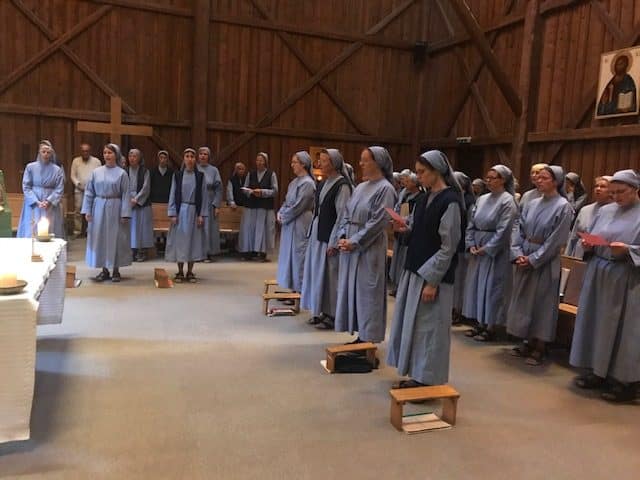 When hearing about a community of women religious, most Christians in North America would automatically identify it as a community of Catholic nuns. That is not so much the case in Europe, however. In Switzerland, the Community of Grandchamp has existed since 1952, drawing women from Lutheran, Methodist, Baptist, Anglican, Evangelical and other Reform traditions of Christian faith.

How did this come about? In the early 1930’s some women of the Reformed Church of French-speaking Switzerland rediscovered the importance of silence as a help to letting the Word of God resonate within them that it might bear more fruit in their everyday lives. They began by organizing spiritual retreats in a residence at Grandchamp, near Neuchatel in Switzerland. Thus spiritual retreats were the fertile ground from which the community was born.

They began with just one retreat a year, but as things moved forward, held them more frequently. Very soon, the need was felt to open the house throughout the year and to cultivate there a permanent presence of prayer. Between 1936-1940, three women came to live there. When Geneviève Micheli arrived in Grandchamp in 1944, the community became stronger in its vocation and began to develop. She later became the first ‘Mother’ of the Community.

Rooted in meditation of the Word, attentive to the Church’s tradition in seeking to live community life, and obedient to the Holy Spirit, the first sisters returned to the sources of monastic life through the friendship and support of Anglican, Orthodox and Catholic religious communities. Carrying in themselves the pain of division among Christians, they were from the very start mindful of the prayer of Jesus for the unity of his followers (John 17:21) and encouraged on their journey by Fr. Paul Couturier of Lyon, France, an ecumenical pioneer who was a contributor to the formation of an annual Week of Prayer for Christian Unity.

Fr. Paul was a strong proponent of “spiritual ecumenism”. He felt that if Christians could be aware of each other’s history, spirituality, traditions of faith and worship, their hurts and their glories, they could thus grow closer to each other. If Christians would not just go to each other’s services, but integrate each other’s spirituality and traditions into their own, the path to holiness in one church could be adopted and enhance the path to holiness in the other churches as well. This, Couturier felt, is the “race that is set before us” in which we spur each other on beyond our own small worlds to fresh understanding, to new awareness of Christ and his Church, to a closer bond with him and his people.

Another significant source of encouragement for the Sisters was Bro. Roger Schutz, a Reformed Protestant and the founder in 1940 of the ecumenical community of Taizé in France. Meeting Brother Roger and their links with the budding community of Taizé were determining factors for what was to follow. In 1952, the first sisters made their life commitments. They adopted the Taizé Rule of Life that Brother Roger had just completed and soon afterwards the Taizé Office of Prayer. These became the basis of their community and liturgical life.

The Rule of Taizé draws clear guidelines for life in community, emphasizing the grace of forgiveness, given and received, encouraging one to always begin again. And so reconciliation is right at the heart of the Rule. This was the turning point. The Rule rooted the Sisters prayer for unity in the reality of community life and called them to live the parable of community. It also made explicit a new way, that of living in small groups or ‘fraternities’ and ‘sororities.’ It was an invitation to go out and join the most needy people where they lived, to be just a presence of prayer, friendship and sharing.

Soon after the life commitment of the first seven sisters in 1952, and inspired by the example of the ‘Little Sisters of Jesus’, the community sent sisters to live a presence of prayer, friendship and solidarity in other places and countries, notably in Algeria, the Holy Land, Lebanon, and also in France, the Netherlands, Germany, and in Switzerland. Most of these stays were for a limited time. And by welcoming German and Dutch women into the community shortly after the Second World War, their vocation of unity expanded into a vocation of reconciliation.

Today the community consists of about 50 sisters who come from different churches, countries and cultures. The majority live at Grandchamp, Areuse, in French-speaking Switzerland. Some are at Sonnenhof, near Basle. And others are elsewhere in Switzerland, the Netherlands and France. In each place, the essentials remain the same: common praise, meditation on God’s Word, the daily Office of Prayer, the call to reconciliation and community life as a parable of communion, and sharing with all those who come. The community wants to be open to all as a place of listening, of finding new strength.

From the start, the community was surrounded by people who cherished the desire to live that spirituality of unity while remaining in the everyday life of the world. From this a whole spiritual family of women and men was born– the Third Order of Unity—a movement in the spirit of Grandchamp and Taizé. Attentive to the prayer of Christ “that all may be one so that the world may believe,” the Third Order’s members seek the unity offered by Christ in their families, their congregation, and in the Church at large. Today groups exist in different places in Switzerland, in Germany, in the Netherlands and in Benin.

In the spirit of being open to the world, the Grandchamp community seeks links and exchanges with other communities, groups, movements and committed individuals, especially networks of religious and/or monastic communities at local, regional, international and ecumenical levels; ecumenical and inter-religious dialogue groups; and movements for reconciliation, justice, peace and the integrity of creation.

My first contact with the Grandchamp community came in 1980 when I was taking a graduate semester in ecumenism at the World Council of Churches Ecumenical Institute of Bossey in Switzerland. One of my classmates was Sr. Pierrette, a Grandchamp sister. While in Switzerland this past August, I spent a few days at Grandchamp. In my conversation with Sr. Pierrette, who served as the superior of the community from 1999-2016, she said,

“We want to witness to the importance of our unity as Christians. You would think that in a time like this, of diminishing congregations, fewer clergy, churches that are being closed, that it would be all the more important for us to join hearts and voices in prayer, and hands and feet in service, to witness to the gospel in our societies today.”