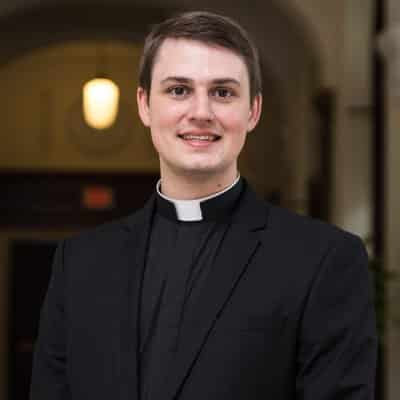 Paulist Fr. Evan Cummings is a native of Clearfield, UT, the son of Kevin and Kit Cummings.

He earned a bachelor's degree in philosophy from Utah State University.

Fr. Evan grew up at St. Rose of Lima Parish in Layton, UT, a parish founded by the Paulist Fathers (although he did not know this connection beforehand).

For his first priestly assignment, he is serving as associate director of St. Thomas More Newman Center at The Ohio State University in Columbus, OH.

PROFILE: Steampunk and Spirituality
(published on the occasion of his 2019 ordination to the priesthood)

WATCH: Interview with Fr. Evan prior to his May 2019 ordination:

In 2016 - 2017 academic year, he spent his pastoral year at Newman Hall - Holy Spirit Parish, the Catholic campus ministry served by the Paulist Fathers at the University of California at Berkeley in Berkeley, CA.

He made his final promises to the Paulist community on August 31, 2018, during a Mass at St. Joseph Seminary in Washington, D.C.

On September 1, 2018, he was ordained a transitional deacon during a Mass in the Crypt Church of the Basilica of the National Shrine of the Immaculate Conception in Washington, D.C.

In his own words:

"When I first started attending Utah State University, I was studying mechanical engineering. One day in my sophomore year, I was desperately avoiding homework by doing anything possible. I went onto Wikipedia and looked up: 'List of Catholic Religious Orders,' and read a bit on all of them. By looking over this list is how I first came across the existence of the Paulists. Something about them clicked with me mentally and spiritually because I kept going back to look at the wiki page and started reading related links and looking at the Paulist website. I got into contact with the Paulists a few months later, and started seriously discerning a call to the society. After attending a couple of retreats, I decided to apply the same year that I was set to graduate college."

On September 1, 2018, he was one of four men ordained a transitional deacon at this special Mass at the Crypt Church of the Basilica of the National Shrine of the Immaculate Conception in Washington, D.C.

In August 2018, he made his final promise to the Paulist Fathers. "I have devoted myself to life to ministry and mission in the Paulist Fathers as a full member which is just an amazing exciting moment in my life," he told Jennifer Szweda Jordan in the interview below.

In January, 2016, he gave the Annual Paulist Appeal at our mother church, the Church of St. Paul the Apostle in New York City: