What Kind of Fires Do WE Kindle? 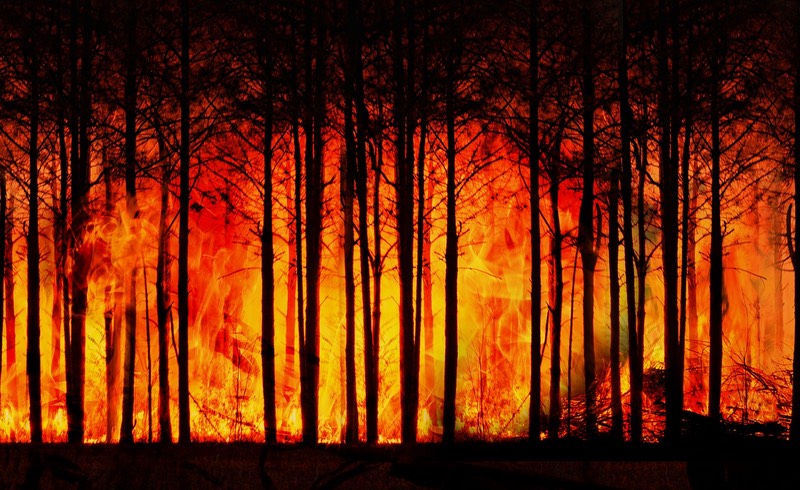 Today, both Jesus and Jeremiah witness to the hardships of proclaiming the gospel. When the good news challenges us to change our ways, it can lead to division and discord. Our reading from Hebrews exhorts us to persevere in holiness, ridding ourselves of our own sinful tendencies.

And there’s the rub: when we disagree with other people around us, how can we be sure that we are the people being true to the gospel? For those times when we have caused division for selfish reasons, we ask God for mercy.

The description of members of a family – the smallest unit of society – disagreeing with one another tells of one of the worst kinds of divisions we can imagine. Jesus is referencing the Book of the Micah, where the prophet foretells of divisions between family members. Micah says that this is a sign of the end times.

In this moment in our nation’s history, it seems as if many households are more divided than at any other point in our lifetimes. Many people have avoiding eating meals or watching TV with their families, for fear of screaming and yelling at each other about politics. Some people say that the actions of governments around the world may be signs of the end times!

And speaking of end times, Jesus talks about setting the world on fire. What does that mean? The first images that come to many of our minds are of house fires, one of the greatest tragedies that can befall a family unit. And as we saw last year in Paradise, California, fires can destroy much more than just one home, conjuring up images as frightening as an artist’s depiction of the inferno of hellfire.

For decades, the National Park Service had a policy of suppressing all wildfires. But over time, the scientific community recognized that wildfires are a natural and cleaning part of the forest life cycle. And so, the NPS began allowing fires caused by lightning strikes to burn, as long as they did not threaten human life or property.

Those of us over a certain age probably remember when 36% of Yellowstone National Park was consumed by fire in the summer and fall of 1988. It was scary to watch as thousands of firefighters and military personnel battled to protect buildings in the huge, sprawling park.

But then, almost immediately after the fires died out, we began to see the wisdom of the scientists. There was widespread destruction, but not total devastation. The soil was burned to a depth of only half an inch, leaving root systems intact. Very few mammals died. And there was an abundance of new life. Certain types of plants began to grow within days, and the wildflower blooms in the next few years were remarkable. Aspen trees, which had been crowded out over the decades by conifers, came back in abundance, even in places up to 9 miles away from any known aspens growing before the fire. The aspen, in turn, gave additional food supplies to elk. Yes, there are places that still bear the scars of destruction, but no human intervention has been necessary to restore life to Yellowstone.

So when Jesus talks of setting the world on fire and bringing division, what is he envisioning? Jesus did not walk among us in order to create division. Many of us can live the gospel without creating tension in our families, because our family members share the gospel values, too. For a Christian, division should be never be a goal in itself. However, by pairing today’s gospel passage with Jeremiah, the lectionary points us towards the fact that sometimes, following the gospel leads to serious divisions with our neighbors, friends, or family members.

Jeremiah never wanted to be a prophet. And can you blame him? A prophet speaks God’s truth, and in Jeremiah’s time, the truth was tough. It was only a matter of time before Jerusalem would be annihilated by the Babylonians, after generations of corrupt leaders in Judah who had turned their backs on God. The rulers and priests wanted Jeremiah to tell them that God would protect them from their own negligence. But Jeremiah was compelled to proclaim the awful truth: God would allow the city to be destroyed.

Likewise, Jesus’ proclamation of the gospel led the rulers and priests to crucify him. But for reasons beyond our comprehension, Jesus’ crucifixion was essential to the Father’s plan for redeeming the world. The “fire” of which Jesus speaks is not a fire of destruction; it is an opportunity for cleansing and renewal.

There are times when we must take risks to proclaim the harsh truths of the gospel. As Jeremiah lamented: “The word of the LORD has brought me reproach and derision all day long. I say I will not mention him, I will no longer speak in his name. But then it is as if fire is burning in my heart, imprisoned in my bones; I grow weary holding back, I cannot!” (20:8b-9)

But for us flawed human beings, there’s always a danger when we feel that we’re being prophetic. In this time when so many of us are impassioned about the stark differences in the visions for our country, how do we distinguish between sparking the purifying fire of the Holy Spirit and fanning the flames of destruction?

Perhaps part of the answer can be found in our reading from Hebrews. As Tom, René, and I lay on the floor at our ordination and the people prayed for the intercession of the saints, I had the most profound sense of the “cloud of witnesses” I’ve ever had: not only were all the people who had gathered from around country praying for and with us, so were friends and family who could not attend (including my deceased parents), but also the universal Church and the entire communion of saints. Immediately after the Mass, in a moment of supreme grace in my life, the first person to ask for my blessing was someone who didn’t particularly like me, and I didn’t particularly like him. Right off the bat in my priesthood, God challenged me to be a force of reconciling our planet. As today’s Hebrews reading says: “Since we are surrounded by so great a cloud of witnesses, let us rid ourselves of every burden and sin that clings to us.”

Pierre Teilhard de Chardin once wrote, “Someday, after mastering the winds, the waves, the tides and gravity, we shall harness for God the energies of love, and then, for a second time in the history of the world, man will have discovered fire.”