Welcome to the Paulists!
by Stefani Manowski
July 28, 2014 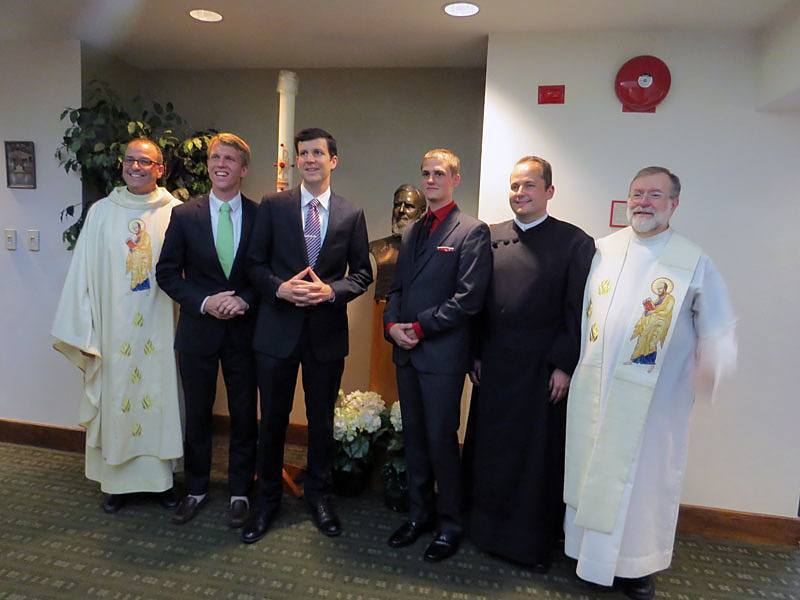 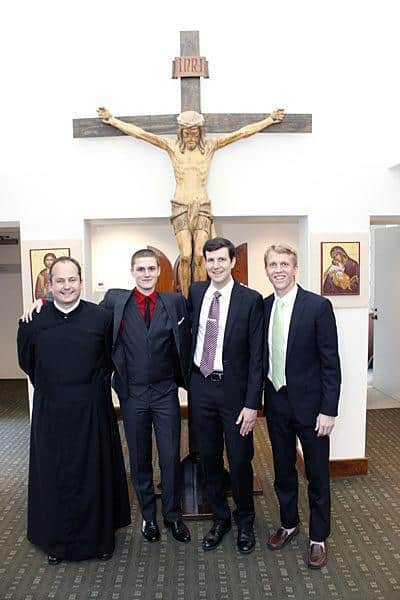 Daniel Arthur, Evan Cummings, Paolo Puccini, and Michael Cruickshank stand outside the St. Paul’s College Chapel before the Mass where they made their first promise with the Paulist community. ENLARGE PHOTO | ENTER SLIDESHOW

What do two financial advisors, a mechanical engineer and a philosophy graduate have in common?

No, you don’t have to wait for the punch line of a bad joke. Rather, it is a cause for celebration.

Four men – Daniel Arthur, Michael Cruickshank, Evan Cummings and Paolo Puccini – made their first promise with the Paulist Fathers during a July 26 Mass in the chapel of St. Paul’s College in Washington, D.C.

After spending a year as Paulist novices, the four men promised to live for the next 12 months according to the society’s constitution as they begin academic studies for the priesthood at The Catholic University of America in Washington, D.C., and continue their Paulist formation. The men will renew this promise promise each year, making a final, lifetime promise in with the Paulists the fall before their priestly ordination.

Paulist President Father Eric Andrews, who celebrated the Mass, said he is incredibly proud of the four new Paulists.

“They have shown great pastoral skills, kindness and charity,” he said. “I am taken by their genuine love of God and service to others, and their tremendous love of Paulist life. Now, we just have to pray them in to the priesthood!” 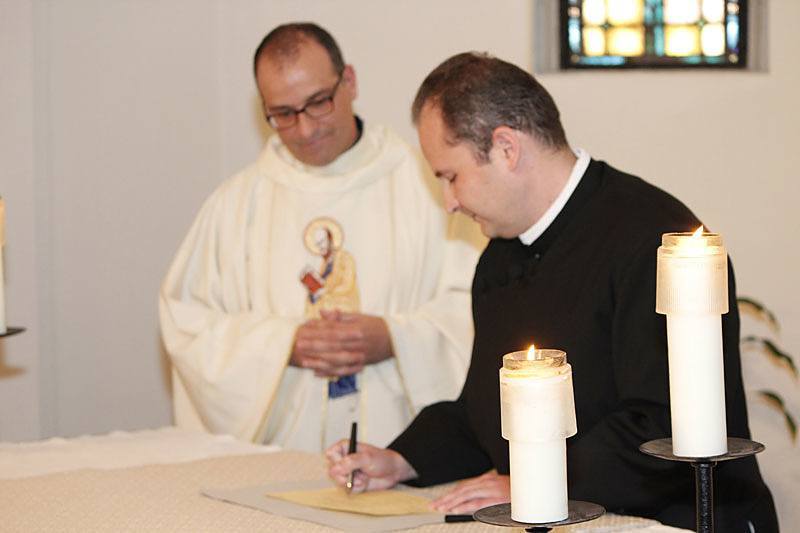 Daniel Arthur, CSP, signs the book listing him as a member of the Paulist community after making his first promise as Father Eric Andrews, president of the Paulist Fathers, looks on.
ENLARGE PHOTO | ENTER SLIDESHOW

An open-minded Daniel Arthur entered the Paulist novitiate one year ago, and brought with him a willingness to trust God and the formation process. He left his work as a financial consultant and his home in Huntington Beach, Calif., for the “life changing” experience of the Paulist novitiate.

“[The novitiate] allowed me to grow closer to God and my vocation,” said Mr. Arthur, 37. “The Paulists have given me an opportunity to grow closer to know and deepen my faith. There is no price that can be affixed to this gift.”

During Lent, Mr. Arthur served the two Paulist parishes in Knoxville, Tenn.: Immaculate Conception Church and St. John XXIII University Parish at the University of Tennessee. The Lenten apostolate gives novices a chance to experience parish life, the responsibilities of priesthood and continue discernment of their vocation.

With his first promise, Mr. Arthur looks forward to “an ongoing commitment to live out the ideals, mission, and charism of the Paulist Fathers, and know that I will be supported by a community that treasures my talents and gifts that God has given me. With sincere gratitude, I pledge to live out the vision of Servant of God Isaac Hecker – a convert, like myself, to the Catholic faith.” 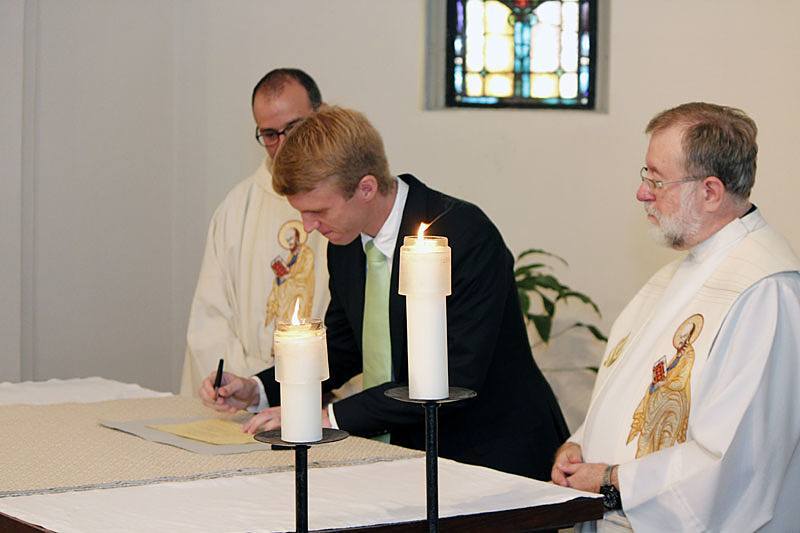 Michael Cruickshank, CSP, signs the book that lists him as a member of the Paulist community after making his first promise as Paulist President Father Eric Andrews and Paulist Novicemaster Father Rich Colgan look on.
ENLARGE PHOTO | ENTER SLIDESHOW

Being accepted by and living in the Paulist community were on the mind of 32-year-old Michael Cruickshank when he entered the novitiate.

“The immediate acceptance by the community was quite surprising,” said Mr. Cruichshank, a financial advisor who hails from Chelmsford, Mass. “I thought that maybe I would have to come in and earn my stripes in some way. But, instead, everybody was quite inviting and truly cared about my opinion and viewpoints. I thought community living would be quite challenging but … It’s even kind of fun most of the time!”

The novitiate experience seemed “to have touched upon every part of priestly life, and it certainly seems like quite a ride,” Mr. Cruickshank said.

Mr. Cruickshank got a dose of parish life during his Lenten apostolate, which he served at St. Philip Neri in Portland, Ore. At St. Philip Neri, he got to participate in Masses, facilitate faith-sharing events and engage in parish life.

“The experience allowed me to view parish life from inside the rectory, and I also witnessed community living in a small setting, which involves even more support and care for each other,” Mr. Cruickshank said.

After a year of discernment, education and community living, “putting CSP at the end of my name is still a little surreal to me,” said Mr. Cruickshank. “But it’s a great feeling to be a part of something that’s quite important to me, and that is building the Kingdom of God. I look forward to doing just that in the Paulist way in the years to come. 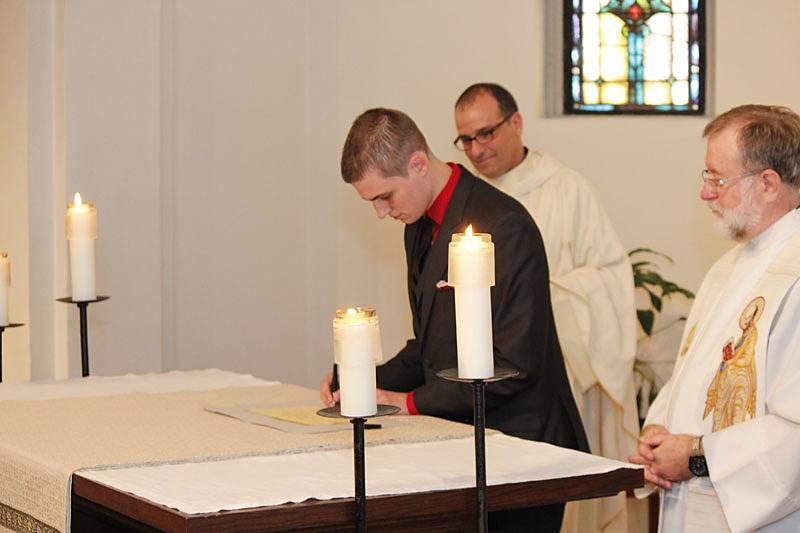 Evan Cummings, CSP, signs the book that lists him as a member of the Paulist community after making his first promise as Paulist President Father Eric Andrews and Paulist Novicemaster Father Rich Colgan look on.
ENLARGE PHOTO | ENTER SLIDESHOW

The novitiate experience was full of pleasant surprises for 23-year-old Evan Cummings.

“The novitiate has helped me to hone my idea of what a priest is spiritually as well as the day to day nature of a priest,” said Mr. Cummings, who graduated with a philosophy degree from Utah State University in 2013. “It also helped me to deepen my prayer life to better discern the call. It also helped to better define what a Paulist is, especially the idea of the Paulist priest.”

“Overall, the experience has been one of the greatest years of my life,” Mr. Cummings said. “It was a year to just focus and pray about what I feel I am called to do. It’s been a time of learning, growth and joy.”

Mr. Cummings said becoming an official Paulist with his first promise involves a deeper connection to the community “as a complete brother to everyone else.”

“This means a deep fraternal commitment to all the Paulists for the sake of the mission,” he said. “Taking the promise means accepting the calling and taking on responsibility to work for the Kingdom of God through the Paulist mission and charism.” 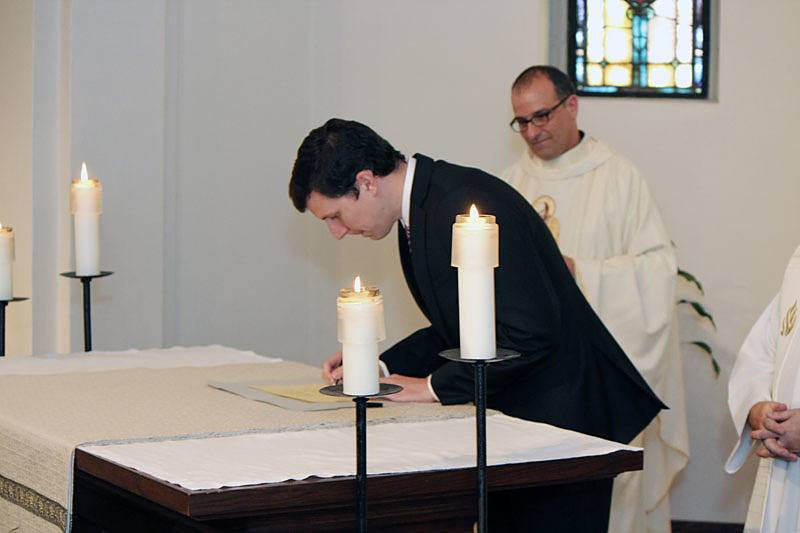 Paolo Puccini, CSP signs the book that lists him as a member of the community after he made his first promise with the Paulists.
ENLARGE PHOTO | ENTER SLIDESHOW

The opportunity to witness and participate in community life with veteran priests during the novitiate has been “amazing” for Paolo Puccini,” who hails from Houston, Texas.

“It is invaluable to see the flow of their daily lives and hear stories from their decades in ministry,” said Mr. Puccini, 27, who graduated from the University of Texas at Austin with a degree in mechanical engineering. “The homilies given at daily Mass have been especially insightful and formative. … I realized there are a wide variety of personalities among the priests, and admire each of them for many unique gifts they bring to their ministries.”

The faith community at the St. Thomas More Newman Center at The Ohio State University in Columbus welcomed Mr. Puccini for his Lenten apostolate. Mr. Puccini got a behind-the-scenes look at the pastoral and administrative workings of the Newman Center, helped plan liturgies, attended student fellowship and faith-sharing events, and engaged in some of the student and resident community ministries.

And now after a year of exploring the Paulist community, Mr. Puccini is read to reciprocate the gifts he has received during his novitiate experience.

“The Paulists have graciously hosted me as a novice over the past year, so I view the promise as a opportunity to begin giving back to the society through fully participating in community life as I continue discerning the calling to ordained ministry,” he said. 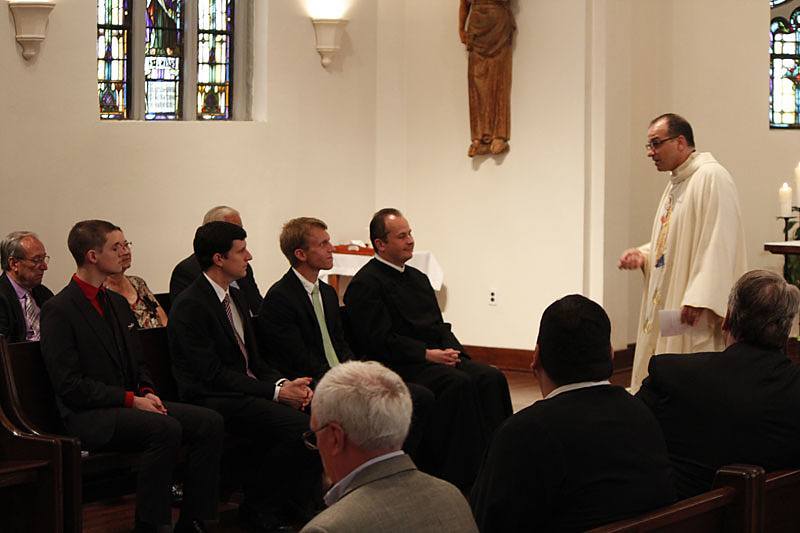 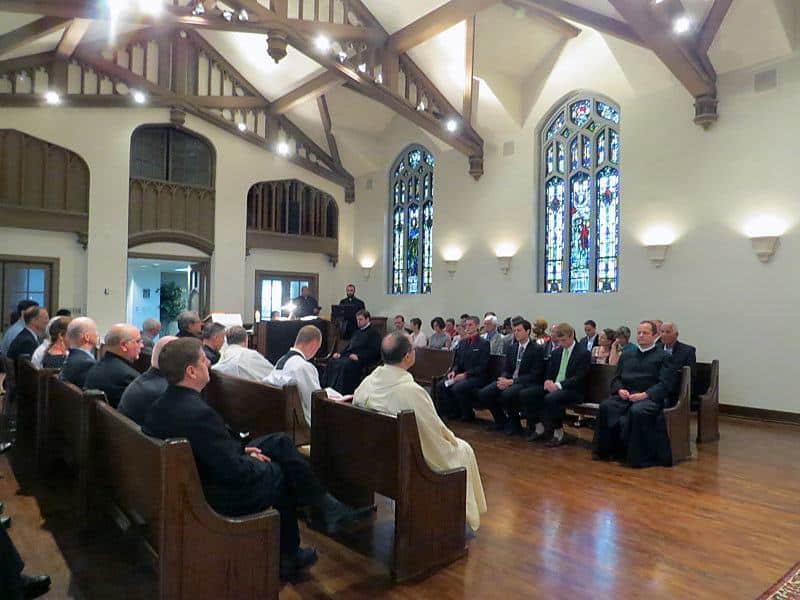 Paolo Puccini, CSP signs the book that lists him as a member of the community after he made his first promise with the Paulists.
ENLARGE PHOTO | ENTER SLIDESHOW