Promoting Non-violence through the Catholic Church 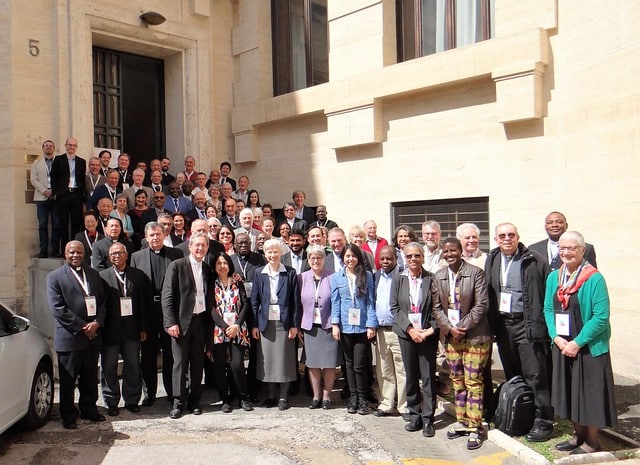 Pax Christi, the Catholic peace movement, was created in 1945 by a French bishop and a French laywoman who hoped to foster reconciliation with their German neighbors. Today, 75 years later, Pax Christi members around the world continue to promote and advocate for peace, and  they also recognize nonviolence as a spirituality, a way of life, and a deep commitment to live Christian values.

In many other faith traditions, nonviolence is a priority. Fr. Vincent Sekhar, SJ, writes: “[Hinduism’s] prime virtue [is] Ahimsa paramodharma. … [The] whole of Jain-Buddhist culture is built on non-injury to life, briefly to say, Ahimsa. Jainism is sometimes called the Religion of Ahimsa. It is Ahimsa that guides both at the ideal as well as at the practical levels of conduct. All the three religious traditions believe that injury to life (Himsa) is the root cause of all ills in the world. Hence these traditions urge non-injury to life as the means of achieving personal and social transformation. Down the centuries, nonviolence to life has acquired newer meanings in the social, economic, and political settings of India, particularly by persons like M.K. Gandhi, translating this great ideal into every sphere of life.”

But few of the 1.2 billion Catholics in the world learn anything about nonviolence as a positive and powerful force for social change – a process for ending violence without lethal force; for transforming conflict; and for protecting the vulnerable – or about the broader understanding of nonviolence as essential to our faith tradition.

Our Resources Better Used for Peace Than for War

In April 2016, the Pontifical Council for Justice and Peace (now the Dicastery for Promoting Integral Human Development) and Pax Christi International co-sponsored a conference on nonviolence and just peace. Participants, many from war-torn countries and communities, came together to imagine a new framework for Catholic teaching on war and peace that could help the world move beyond repeated cycles of violence and war. We agreed that the consequences of horrific violence and war (the cost in human life, psychological trauma, moral injury, environmental damage, climate disruption, etc) are too high and that the vast resources spent on preparations for war are resources desperately needed for integral human development.

During the conference we wrote an “Appeal to the Catholic Church to re-commit to the centrality of Gospel nonviolence,” urging the Church to “integrate Gospel nonviolence explicitly into the life, including the sacramental life, and work of the Church through dioceses, parishes, agencies, schools, universities, seminaries, religious orders, voluntary associations, and others.” We asked Pope Francis to write his World Day of Peace message on nonviolence, and were delighted with his 2017 World Day of Peace message, “Nonviolence: A Style of Politics for Peace.”

At a Vatican conference on nuclear disarmament in November 2017, Bishop Robert McElroy (San Diego, CA) said, “The Church is in the midst of a fundamental reappraisal of how to balance the Christian obligation to nonviolence with the need to resist evil in the world. The traditional norms of just war, particularly in the jus ad bellum, increasingly appear to be incapable of effectively constraining violence in the modern world. The power of nonviolence, once relegated to the category of romantic idealism, has emerged as a potent force for social transformation and the building of lasting peace … The Church must be a voice in the world constantly pointing humanity toward the path of nonviolence and the logic of peace … This radically positive approach demands that we change the default position in our reasoning about war, from acquiescence in the patterns and structures of violence to an active and persistent engagement with strategies of peace.”

The Catholic Nonviolence Initiative (CNI), a project of Pax Christi International which grew out of the 2016 Rome conference, believes that the Church can play a major, positive role in making this happen. In the past few years, CNI has engaged in an on-going conversation with the Vatican and with the Church around the world, including in many war zones, about the breadth and potential of active nonviolence to sustaining peace. In April 2019, we held a second gathering, co-sponsored by the Dicastery, to deepen this conversation.

Other events and encounters are energizing the effort for active nonviolence, particularly with religious congregations and universities. We are working to identify and support more and clearer public policy proposals at the United Nations, at the European Union, in Washington and elsewhere, that promote peacebuilding and nonviolent approaches to national and international conflicts, so that the world will have alternatives to military action when crises occur in the future.

We also are listening carefully to people from different contexts, such as the perspective of liberation theologians in Latin America. Other examples: Nonviolence in the context of occupation in Palestine; in the context of poverty or street violence in Haiti; in Europe facing an uncertain future; in structural racism in the U.S.; in post-colonial Africa, and in Asia and the Pacific where the nuclear threat is all too real.

The obstacles are huge, including powerful forces behind the big business of weapons and war, but we can live our way into this challenge by nurturing a spirituality of nonviolence, by  learning to interact with our neighbors nonviolently, by working for a just peace wherever we are planted, and by advocating for nonviolent ways to conduct the affairs of a broken world.

Judy Coode is the project coordinator of the Catholic Nonviolence Initiative, a project of Pax Christi International. She lives in Washington, DC.