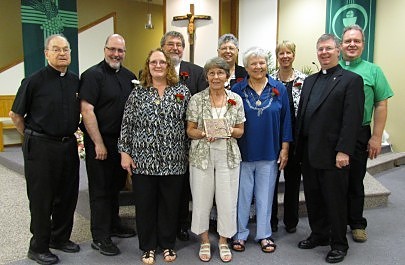 Six men and women made their first promise as the founding members of the Paulist Associates group at St. Luke University Parish in Allendale, Mich. The hundreds of congregants gathered for Mass June 17 gave a sincere round of applause after the short promise ceremony, which took place after the homily. The new Paulist Associates are: Alan and Ramona Baldridge, Kay Erickson, Virginia Molenkamp, Sue Sandberg and Elyse Underhill.

A special reception was held after Mass to celebrate this milestone in the spiritual journey of these six people – and the St. Luke community.

The Paulist Associates are lay men and women, Catholic and non-Catholic, who freely associate themselves with the Paulist spirituality and charism by making a commitment to embody the Paulist ideals in their daily living.

“The Paulist Associates are an extremely important part of the Paulist community because it is through them that the Paulist charism and mission is extended beyond the limited number of the Paulists themselves,” said Father Larry Rice, CSP, the national director of the more than 200 associates. “[The associates] are dedicated members of our worship communities throughout North America, and work alongside the Paulist to share their faith and Paulist spirituality.”

Mr. Baldridge saw a flier about starting an associates group at St. Luke and “just knew I had to be a part of it.”

“To help with the Paulist mission to help the church, to put your faith out there in the community is very fulfilling,” said Mr. Baldridge, who is very involved in community life at St. Luke’s and hopes to carry the spirit and leadership of the associates into the parish Knights of Columbus Council.

Ms. Sandberg was “drawn to the warmth of the Paulists and Paulist spirituality.

“There is a very welcoming atmosphere with the Paulists,” she said. “Reaching out to other people and sharing what we have is an incredible gift.” 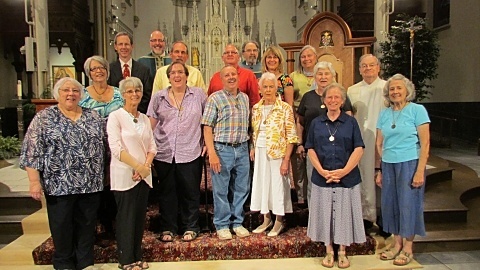 Members of the Paulist Associates group at the Cathedral of St. Andrew in Grand Rapids, Mich., renewed their commitment to the Paulist community during Mass June 16.

The day before their first promise, the Associates from St. Luke’s joined the associates at the Cathedral of St. Andrew in nearby Grand Rapids for a retreat led by Father Rice. The Grand Rapids associates renewed their promise at Mass later that day and then gathered for a pot luck supper in the Paulist residence. The retreat focused on Paulist spirituality, listening to the Spirit, leadership and the importance of promises. This year’s events were dedicated to Father Joseph Gallagher, CSP, former president of the Paulist Fathers who started the associates group in Grand Rapids many years ago.

Longtime associate Norine Simmons said the retreat offers an “important and symbolic time” to personally reflect on the promise she makes each year as an associate.

“I really appreciate how the Paulist charism has guided me in my daily life,” she said. “I also like how this group is like a small Christian community, which offers a kind of intimacy to my faith life.”