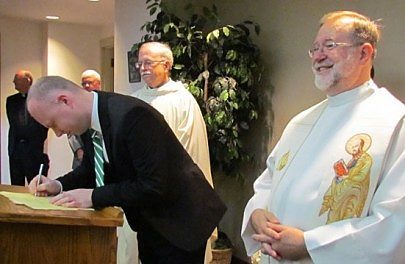 Michael Hennessy admits that he is in a good place.

The 31-year-old Connecticut native took the next step to ordination as a Paulist priest by making his first promise as with the Paulist Fathers during a July 27 Mass at St. Paul’s College in Washington, D.C.

After spending a year as a Paulist novice, Mr. Hennessy promised to live for the next 12 months according to the society’s constitution as he begins academic studies and continues priestly formation with the Paulist Fathers. The promise is renewed each year, culminating with a final promise the year before ordination.

Paulist President Father Michael B. McGarry was on hand as the main celebrant and homilist at the Mass, and preside over Mr. Hennessy’s first promise with the community.

“[Mr. Hennessy] is bold enough to stand before us and God to commit himself to the lasting Paulist mission,” he said in welcoming the crowd of Paulists and Mr. Hennessy’s family and friends to the Mass. 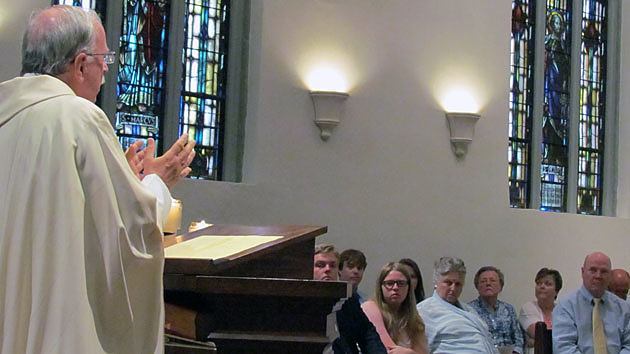 As he marks this major milestone in his journey to the Paulist priesthood, Mr. Hennessy noted that his family and friends were not at all surprised that he decided to go this route.

“They were journeying with me,” Mr. Hennessy said. “This had been on the radar for a few years.”

Mr. Hennessy was “blessed with a great Catholic experience” at St. Anselm College in Manchester, N.H.

“It started to come together late in college,” he said. “But I didn’t discern a calling to the diocesan priesthood or monastic life. I wanted to find the place in the church where I would serve best.”

After graduating in 2004 with a history degree, Mr. Hennessy spent eight years teaching that very subject at Central High School in Manchester. He became familiar with the Paulists through Busted Halo, a ministry to spiritual seekers in their 20s and 30s found on the Web and SiriusXM satellite radio (channel 129). 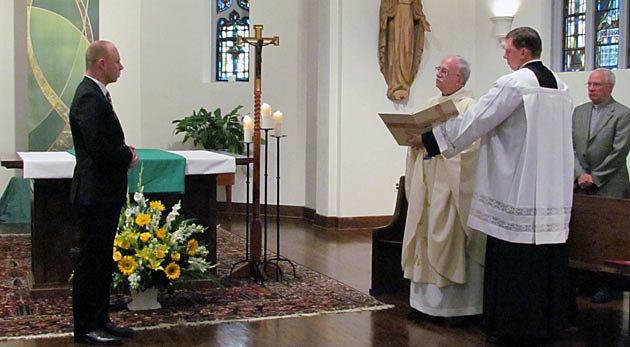 Paulist President Father Michael B. McGarry asks questions of Michael Hennessy before the Paulist novice makes his First Promise and becomes an official member of the Paulist community.

Attracted to the campus and young adult ministries carried out by the Paulists, Mr. Hennessy entered the Paulist novitiate in August 2012.

“The novitiate was a confirming and affirming experience,” he explained. “It helped me focus and deepened the knowledge that I am moving in the right direction. It is going well, and that is as good as a sign as I could ask for.”

In addition to familiarizing himself with the Paulists as individuals and community life, Mr. Hennessy’s novitiate experience included prayer, spiritual reading and reflection. He spent his Lenten assignment at the St. Thomas More Newman Center at The Ohio State University in Columbus, and also visited the residents of the Little Sisters of the Poor, a nursing care residence in Washington, D.C., each week.

“The novitiate put me in a good place to tackle the upcoming academic formation and further commit to community life,” he said. “You have to be open to what God has to say to you, be open to where God leads you. You have to let God lead you down your true path.”