10th World Assembly of Religions for Peace: A Story of Hospitality, Compassion, and Collaboration 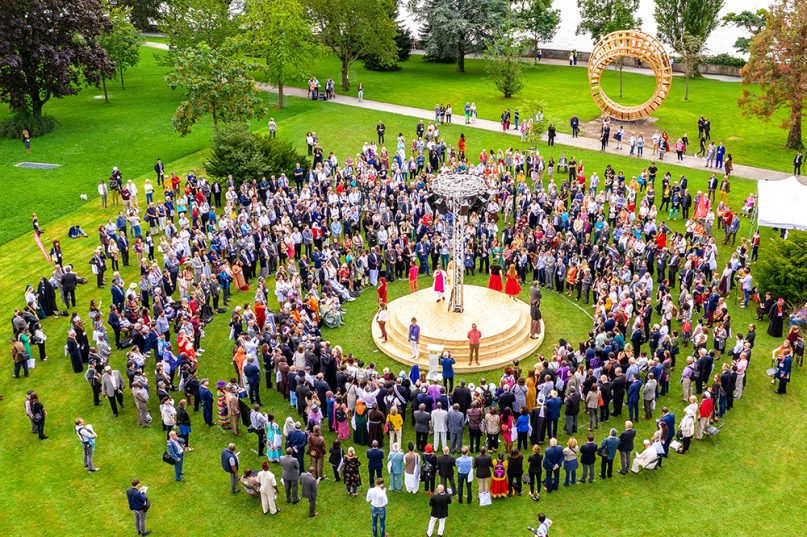 Religions for Peace USA is the largest and most broadly-based representative multi-religious forum in the United States, with participants from more than 50 religious communities, representing each of the major faith traditions, including the Paulist Fathers. The organization identifies shared commitments among religious communities in the U.S., enhances mutual understanding among these communities, and facilitates collaboration to address issues of common concern. The organization envisions a nation in which people of faith and goodwill live together in respect and mutual support, creating paths to peace and justice.

A five member delegation of Religions for Peace (RFP) USA joined over 900 religious representatives from over 125 countries to participate in the 10th World Assembly of Religions for Peace held August 20 to 23, 2019 on the German island of Lindau on Lake Constance. The Assembly theme was Caring for Our Common Future: Advancing Shared Well-Being and focused on five commissions:

The US delegation reported on the North American regional consultation for each of the 5 commissions, provided input to the Assembly Declaration, and met with sister RFP chapters from Japan, South Korea, China, and Pakistan to promote bilateral relationships between national chapters of the RFP family.

A North American regional caucus was held to focus on issues of common interest in North America (Canada, US, and Mexico). The caucus brainstormed ideas of projects that such a regional body could implement along with developing an organizational structure.

There was general agreement at the caucus that RFPUSA work with our Canadian partners to encourage Canada to develop a representative Canadian chapter of RFP so we can work together with RFP Mexico in forming a North American regional RFP body.

RFPUSA is particularly thrilled at the appointment of Dr. Azza Karam as the new Secretary General of RFP International. We welcome Dr. Karam with open arms as we say a gracious thank you and goodbye to Dr. William Vendley in deep appreciation of his decades long service to the RFP family worldwide.

There were three experiences that took my breath away – those moments in which your heart melts. I share them with you so you can reflect on them and find some common connections. One evening during the conference, the local Catholic and Protestant Churches that are located on the same street across from each other hosted the Long Table dinner for the Assembly attendees as well as Lindau residents and visitors. Long tables were arranged in one row in the middle of the street between the two churches, and on it were placed homemade dishes from the congregants of both churches – yes all the food served was homemade by them and no caterer! We sat on benches with translators who helped with conversations with our dinner hosts. As I sat down, my heart melted because it reminded me of my own faith’s tradition of Sikh langar – this was indeed the langar of the Lindau community.

At the dinner banquet, RFPUSA met with the representatives of RFP Pakistan for fellowship. Sitting at our dinner table was a young lady who didn’t seem to be from the U.S. or South Asia. She introduced herself as being from Malta and shared that she works for the Jesuit Refugee Service. She works with refugee families who come to Malta on their way to other parts of Europe. She interviews the families and publishes their stories to advocate for the refugee families. I asked her how she deals with the pain and suffering shared by the families. Her answer was simple –“My faith sustains me in this work.” I was in awe with her commitment and work. I came away from the Assembly with a deep sense of gratitude for her faith-based work in the field promoting the least among us. For all I met at the Assembly, this young woman from Malta left an everlasting impression on me.

On the last evening of the Assembly we went on a boat cruise on Lake Constance. On the top deck of the boat, Cardinal Onaiyekan happened to walk by. I asked him what we should do if this boat begins to sink. His response was: “We should not pray but let us all sink together because we will go straight to heaven and once there we can together continue working for peace and justice.” And that is our calling – work together for peace and justice in our world!

Religious News Service (RNS) interviewed some members of the U.S. delegation and published two articles from the Assembly (which were widely printed in local newspapers across North America):

The declaration of the 10th World Assembly of Religions for Peace can be accessed here.

Dr. Tarunjit Singh Butalia. RFP USA Executive Director and founding trustee of Sikh Council for Interfaith Relations, has been a servant-leader in the interfaith and interreligious movement for over 2 decades. He is also a member of Board of Trustees of the Parliament of the World’s Religions as well as the North American Interfaith Network. Locally he works with the Interfaith Association for Central Ohio. tarunjit@rfpusa.org.